According to a new period of data released by the China Association of Automobile Manufacturers in July, the export situation of parts and components is still grim. Among them, from January to June, only cumulative exports of components of the driving system increased by 5.03% compared with the same period of last year. Others, such as brake systems, electronic appliances, transmission systems, engines, and body accessories, were all different from the same period of last year. The degree of decline has fallen between 16.23% and 52.80%.

As the financial crisis affected the global automotive industry, major economies such as the United States, Europe, and Japan have entered a recession. As a result, global auto industry sales have been reduced, which has a direct impact on China's auto parts exports. At the same time, in order to protect local enterprises, some countries implement trade protection policies and set up non-technical trade barriers, which further deteriorates the export environment of China's parts and components.

Analysis on Import and Export of Engine Products in June 2009 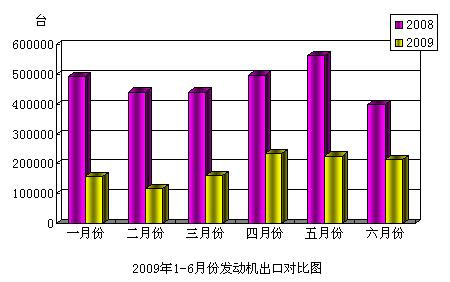 From the above data, it is easy to see that although the volume of purchases and exports is large, there are still some problems:

There is no fundamental change in the status of low value-added technology, high resource consumption, and lack of brands in component exports.

Dong Jianping, deputy secretary-general of the China Association of Automobile Manufacturers, said in an interview with an HC reporter: â€œFrom the perspective of recent exports, there are more aluminum parts, water tanks, glass, wire harnesses, etc. in the export of parts and components. The added value of technology is low and it is a resource-consuming product; in addition, there are many spare parts that are exported to other brands.â€

Although the annual export of parts and components has maintained a growth rate of about 25%, and exports account for more than half of the global automotive product exports, the export of high-value-added products such as engines are mostly monopolized by foreign-invested companies, and their profits also account for To more than 1/3. Most low-value-added products with high energy consumption and high consumables are manufactured and exported by local parts and components companies. They only rely on low-cost products to make profits. The controllable space is poor, and most of them are based on volume.

For a long time, the main advantage of China's spare parts exports is low cost. Due to the abundant labor supply in our country and the oversupply of supply, we will continue to provide low-cost labor. The low labor cost in our country makes our country's competitive advantage in labor-intensive components very obvious. Bases, bumpers, wire harnesses, glass, brake pads, clutches, heat sinks, mufflers, universal joints and other products, domestic prices are often about 20% lower than international prices. It can be said that the labor advantage is China's current auto parts exports the biggest competitive advantage.

The low labor cost advantage is very important for the formation of the international competitiveness of the auto parts industry. Japan is the most typical example. Japan's development of the automobile industry in that year and its ability to compete with the United States and Europe in the international market relied mainly on the advantages of low labor costs, but as Japanâ€™s wages rose sharply, its low-cost advantage quickly disappeared.

Coincidentally, China is also facing such a change. With the promulgation of the new labor law, the cost of employing personnel is gradually increasing. The advantages of spare parts products in terms of price are being weakened. The export is also a product with high energy consumption and low added value, and the degree of compression of profit space can be imagined.

Dong Jianping emphasized: â€œThe key to improving the export competitiveness of China's spare parts products is therefore to increase the level of production of our product processes and raise the product level. We must not always produce and export raw embryos, but must go to a higher technological level. Only by improving technology and production processes can we be able to obtain as much profit as possible.â€